Skip to NavigationSkip to MainSkip to Footer
Wireless Charging

What is Qi v1.3 and how will it improve wireless charging?

Qi v1.3 is set to be the next update to the popular de facto industry standard for wireless charging. The Qi wireless charging specification has seen multiple revisions and modifications since it was first released in 2010, bringing with them improvements in power output, efficiency, and safety. The current Qi specification v1.2 was released in 2015 and brought the possibility of wireless fast-charging up to 15 W, for the first time allowing Qi to realistically compete with wired charging technologies. Minor revisions were made to v1.2 over the years following its release to address minor issues and further improve the wireless charging experience.

Jump forward to 2021 and v1.3 of the Qi specification is on the horizon. While no major increases in charging output are expected, the main focus of the new specification is expected to be the addition of an authentication algorithm between the transmitter and receiver devices. In this post we'll take a deeper look into what an authentication algorithm means for wireless charging, how it's likely to work, and how it can improve charging safety and the Qi experience. If you need a quick refresher on how wireless charging itself works, check out our beginners' guide.

The key to certified charging

On the most basic level, using an authentication protocol between transmitter (charger) and receiver (smartphone or other device) allows the receiver device to confirm that it is interacting with a Qi-certified transmitter and request an appropriate and safe level of wireless charging power from the charger. In the case that the device is unable to authenticate a Qi-certified charger, it could choose to limit the amount of power it accepts or reject charging altogether. This could be thought of a similar to how you use a password to protect your home WiFi network from unauthorized users, only allowing those who are able to pass authentication (and that you trust) gain access to the network.

While at first glance the implementation of device authentication may appear an effort to force manufacturers to certify devices (and consumers to purchase certified products), the primary intention behind such an implementation is the safety of consumers and their devices. Built in to the Qi certification are a number of safety features intended to minimize the risk of damage to either charger or receiver during the wireless charging process. Only by passing the WPC's Qi certification process can a manufacturer be sure that their device's safety features work correctly. Wireless chargers which have not passed Qi certification may not support or comply with important safety features and could cause permanent damage to receiver devices, harm to users, or dangerous incidents such as fire or explosions. 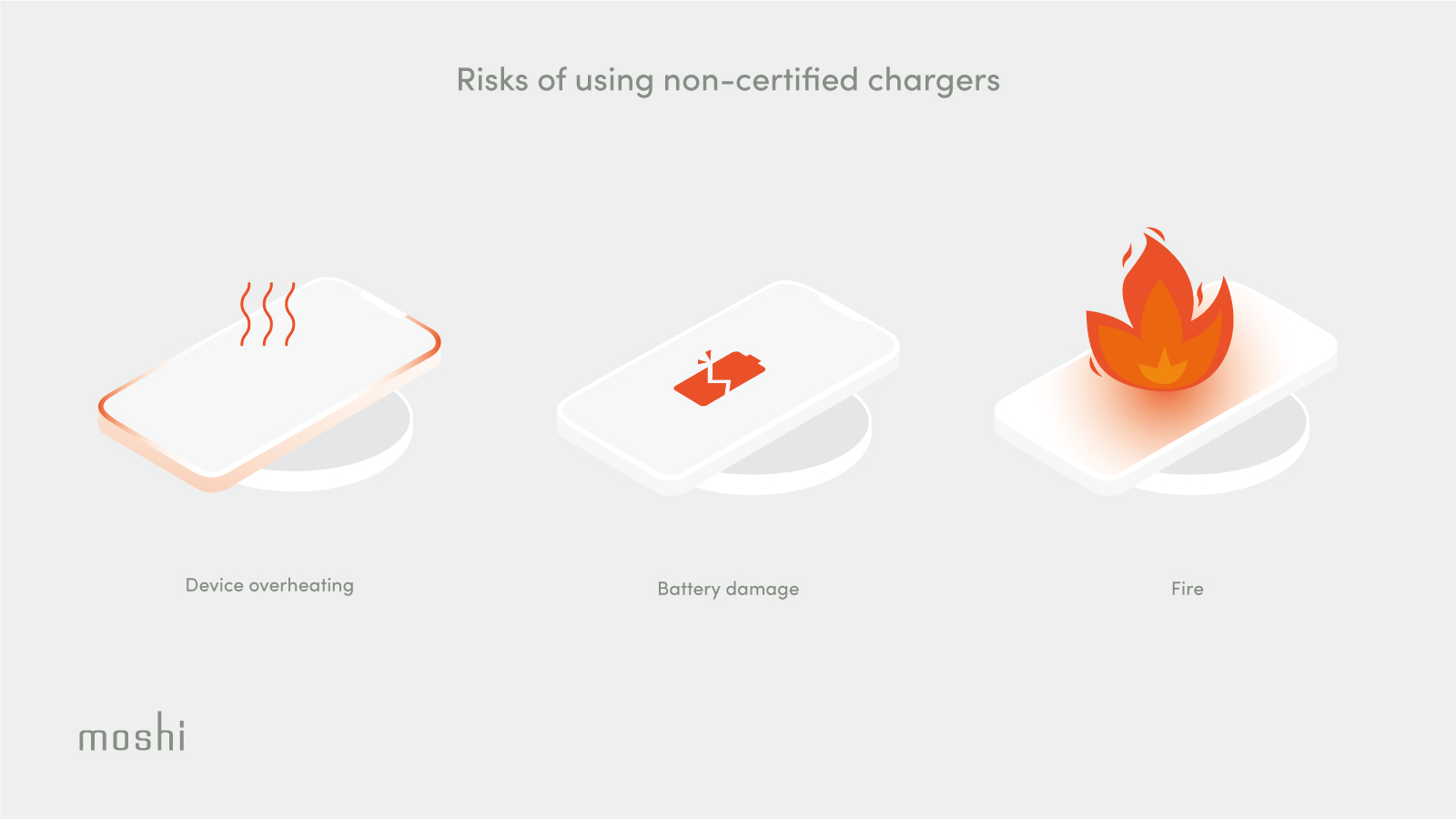 Aside from poor charging performance, there are a number of serious risks when using non-certified wireless chargers

Many such chargers are manufactured using inferior, low-cost components and are of poor build quality, further increasing the likelihood of adverse operation.

"Wireless chargers which have not passed Qi certification may not support or comply with important safety features and could cause permanent damage to receiver devices, harm to users, or dangerous incidents such as fire or explosions."

How does it work?

The authentication process will rely on physical chipsets integrated into both certified transmitters and receivers, meaning that it won't be possible to achieve forward compatibility with a firmware update. When a receiver device detects the presence of a transmitter nearby (such as when placed down on a charger), it will use a short-range communication protocol to request a certification key from the transmitter, and use a pre-defined algorithm to determine the certification status of the transmitter device. Once authenticated, the receiver will then request the desired amount of charging power from the receiver to ensure safe charging. The onus will always be on the receiver to determine how much charging power it will request from the charger based on the results of authentication. 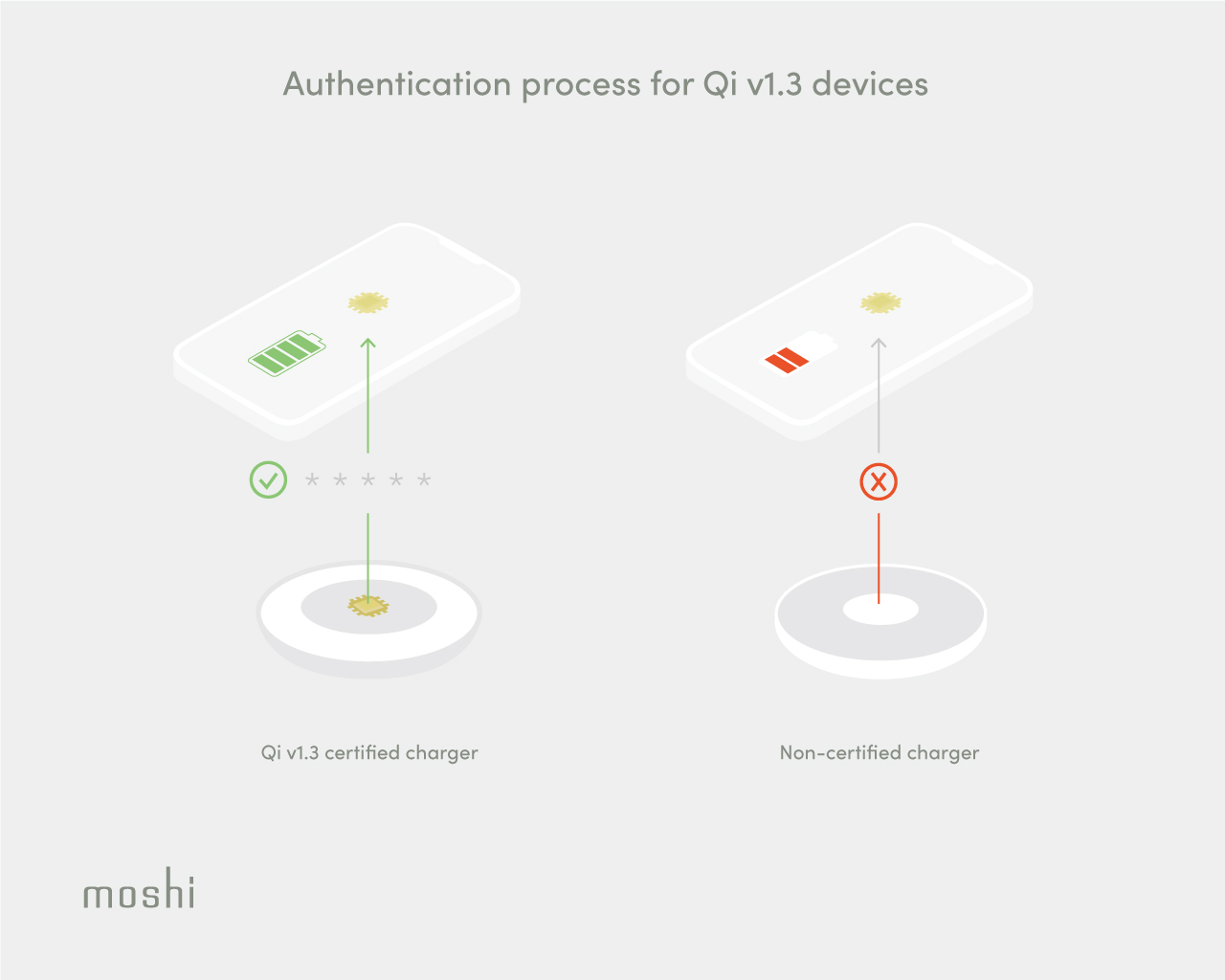 Built-in chips will use an authentication algorithm to confirm the presence of a Qi v1.3 certified charger

Production and supply of these specialized authentication chips will be limited to a small number of manufacturers who are approved partners of the Wireless Power Consortium (WPC), making it difficult for manufacturers to make counterfeit chips or falsely claim that their products are certified.

Will it be backward compatible?

Due to the fact that the new authentication protocol will use physical components which are not present in current devices, there will be limited backward compatibility between the new and old specifications. Existing transmitters (chargers) and receivers (smartphones and other devices) supporting the current Qi specification (v1.2) will not become obsolete overnight, but may encounter some limitations in the future based on the combination of devices being used: 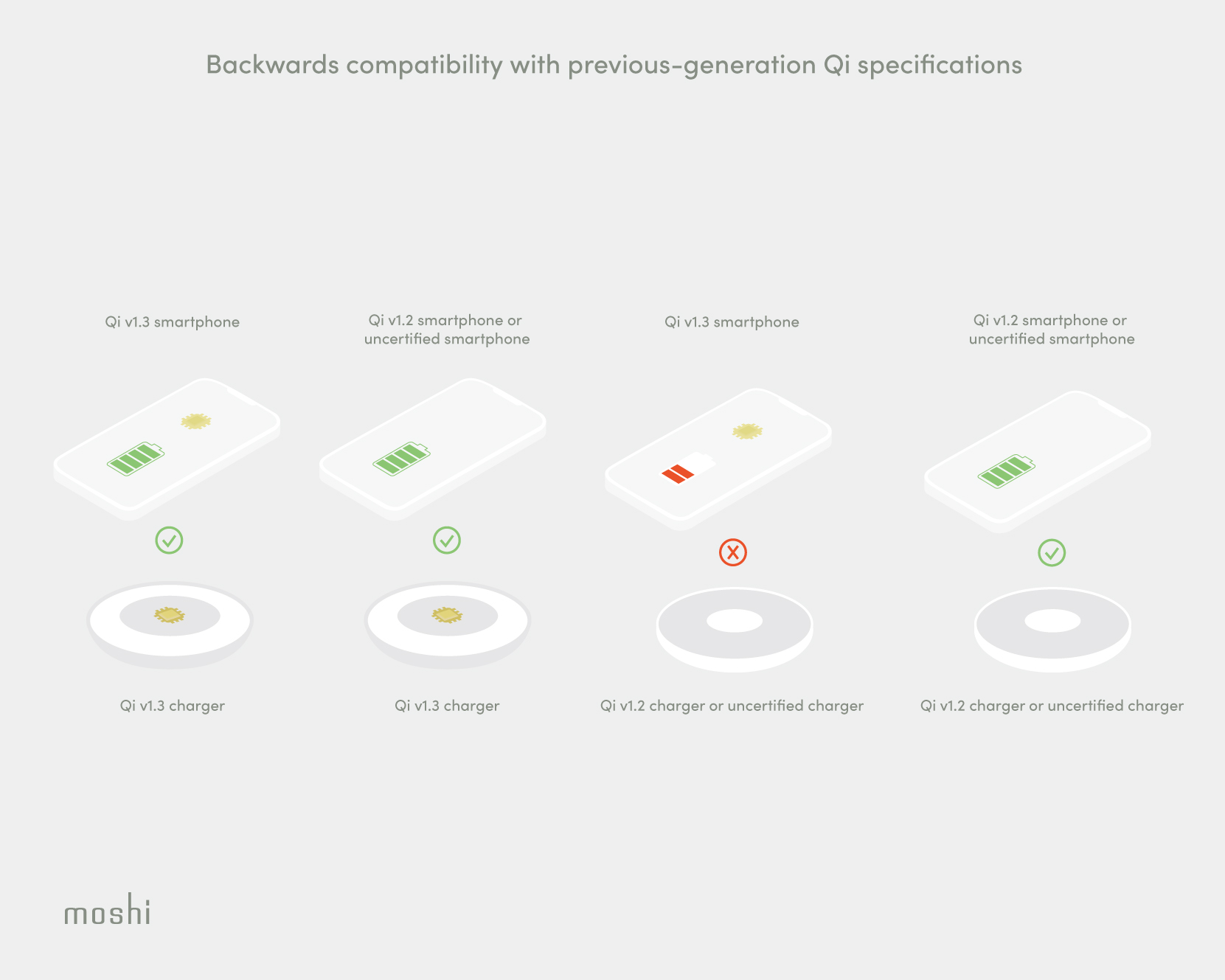 It is worth noting that the authentication chips in new devices will be unable to differentiate between v1.2 Qi-certified chargers and non-certified chargers, therefore it is quite likely that chargers supporting previous versions of the Qi standard will be subjected to the same restrictions as those which are uncertified.

When will v1.3 devices be available?

At the time of writing (April 2021), Qi v1.3 specifications are still in the review phase, with final ratification expected in 2022. As with many new specifications, it may take several months after the spec is confirmed until we start to see devices available in the market, especially in the case of receiver devices like smartphones which have a longer development cycle. Moshi is currently in the early stages of developing wireless charging products which will support the Qi v1.3 standard.

There's no doubt that the next generation of Qi wireless charging products is set to deliver an even safer and more reliable wireless charging experience. Given the significant investment that many people put into their smartphones and other personal electronics, the ability to guarantee that the wireless charger they are using has been certified for safety and compatibility will be a welcome benefit.