Skip to NavigationSkip to MainSkip to Footer
iPhone 12

Some caveats of using the MagSafe wireless charging system

The launch of the iPhone 12 in late 2020 brought with it the announcement of Apple's new MagSafe wireless charging system, which uses magnets to align the wireless charging coil on the back of the phone to a charger or mount (or both). Apple claimed that MagSafe would not only simplify charging but also open up a whole new range of charging and mounting possibilities for iPhone users. While MagSafe is no doubt an innovative technology, we believe there are still some shortcomings which need to be addressed before it can be considered a true replacement for the de facto industry standard Qi wireless charging.

The key benefit of traditional wireless charging systems which use the Qi standard is that they only requires one hand for operation, making it easy to simply plop your phone down on a wireless charging pad to charge, then pick it up again when you're done. There's no need to fumble around with cables or use two hands to connect and disconnect them.

While MagSafe and traditional cables require two-handed operation, Qi wireless charging is all about convenience.

While MagSafe eliminates the physical plugging in of cables, the magnetic alignment feature makes it almost impossible to use single-handedly. If you're using Apple's basic MagSafe charger, you may be able to hover the phone over the charging disc so that it attaches of its own accord, but when it comes time to disconnect, the lightweight charging disc will stay attracted to the back of the phone as you lift it up, meaning you'll need to use a second hand to tug at the cable to release it—practically the same effort as if you were disconnecting a traditional cable. 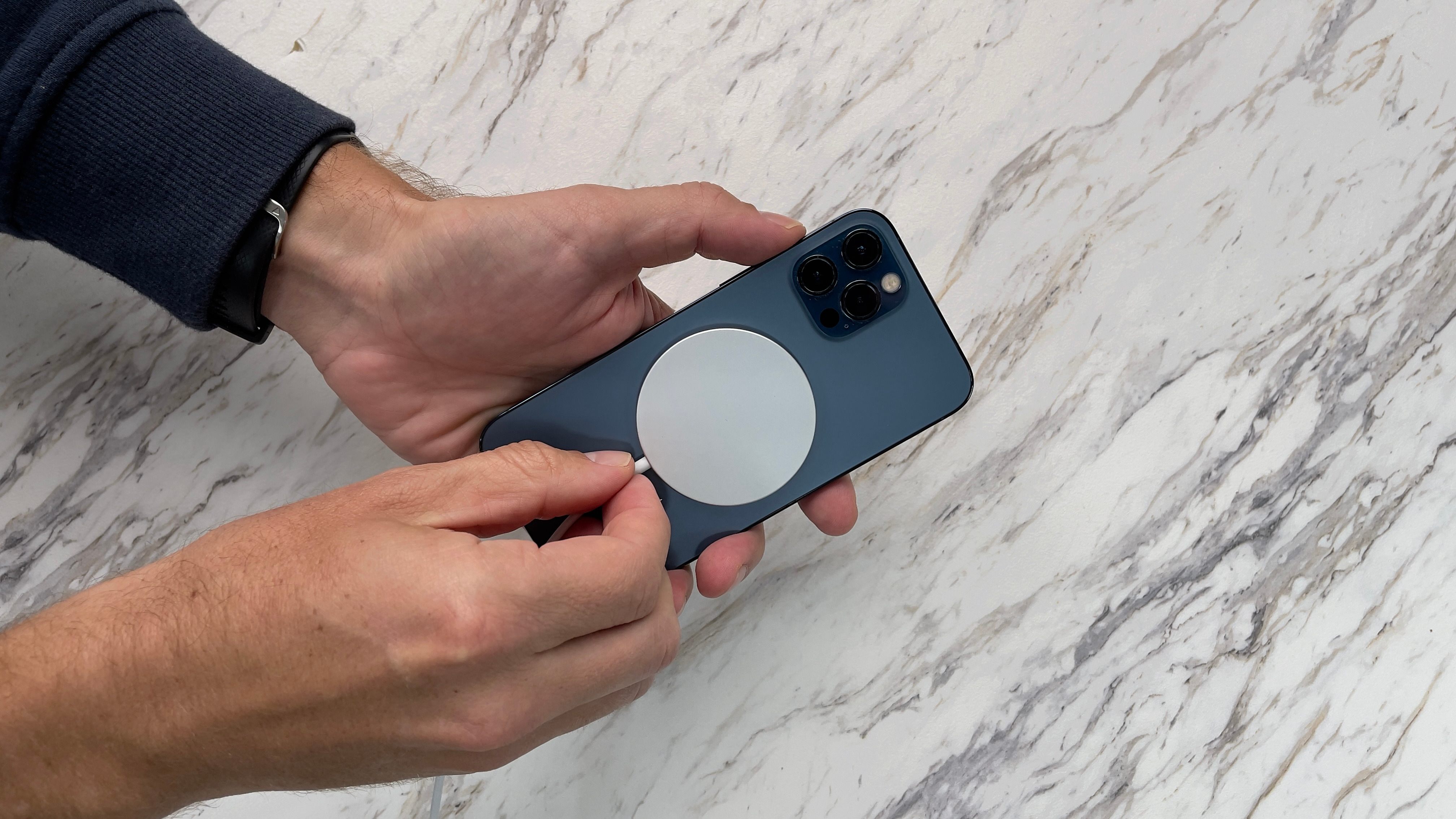 Removing the MagSafe charger from the back of your iPhone is usually a two-handed affair.

The cost of entry is possibly the biggest concern for most iPhone users contemplating making the jump to MagSafe. Apple's most basic MagSafe charger consists of a charging disc with integrated power cable and is currently listed on apple.com for $39, and that doesn't include a power adapter (that you'll need to buy from Apple in order to get the fastest charging speeds), which will cost you an extra $19. Feeling fancy? The MagSafe Duo charger with integrated Apple Watch charger sells for $129, and that also does not include an adapter. Apple suggests you use at least a 27 W charger for best performance—which Apple conveniently does not make—so you'll be up-sold to their 30 W model at $49. Don't expect third party solutions to be any cheaper, as MagSafe accessories require licensing from Apple, adding extra costs for the manufacturer.

Cases need to be approved

Because MagSafe relies on relatively strong magnets to align the charging disc to the back of the phone, cases need to incorporate their own magnets into the design and need to be certified by Apple in order to be officially MagSafe compatible. Similar to the chargers themselves, any third-party manufacturers will incur additional costs for components and testing in order to pass Apple's certification process; a cost which will be passed on to the end consumer. There have been reports of MagSafe being able to charge iPhones through non-certified cases, however the charging disc may not stick as firmly to the back of the case, as the attraction of the magnetic array is significantly reduced.

"cases need to incorporate their own magnets into the design and need to be certified by Apple in order to be officially MagSafe compatible."

As we mentioned above, neither the Apple MagSafe or MagSafe Duo chargers come with a power adapter in the box, meaning you'll need to purchase one separately. The iPhone 12 doesn't come with an adapter either, so even if you do have an old power adapter laying around, it's not going to be one of Apple's newer 20 W models, which is required in order to achieve the maximum charging output of 15 W. This is because MagSafe uses the more obscure 9 V/2.22 A USB Power Delivery (PD) profile, which is not supported by the 18 W adapters that come with most flagship phones (including the iPhone 11 Pro and Pro Max). You may be able to find some third-party adapters which use the required power profile, but the only way to guarantee performance is to use Apple's own brick.

"MagSafe uses the rarer obscure 9 V/2.22 A USB Power Delivery (PD) profile, which is not supported by the 18 W adapters that come with most flagship phones."

Because the technology was developed in-house by Apple itself, the MagSafe ecosystem is essentially 'Apple-only', closed to outside participants unless they use Apple-certified components or have their products certified by Apple, and that includes the components which could be used to implement MagSafe on non-iPhone devices. Apple's MagSafe chargers do support the Qi wireless charging standard, but only up to 7.5 W, which is far short of what current Qi EPP chargers are capable of providing. Add to this that it will be difficult to keep a basic MagSafe disc aligned to the coil of an Android smartphone without the magnetic assistance. Therefore, if you live in a multi-device household, MagSafe chargers will only be useful for iPhone devices, requiring two sets of charging gear. In contrast, a house equipped with Qi-certified chargers like Moshi's Q Collection would be able to charge both iPhone and Android devices wirelessly.

If you're a hardcore iPhone user who is able to justify the additional expense and overlook the shortcomings of the current MagSafe system, there are certainly benefits to be reaped, especially if you can achieve that illusive 15 W charging output. Otherwise, it's difficult to argue against the convenience and reliability of the Qi standard, which is still able to charge all iPhone models at 7.5 W without needing Apple's 20 W adapter. All Moshi Q Collection wireless chargers are Qi-certified and can provide up to 15 W of charging output to compatible devices (although iPhones will only accept a maximum of 7.5 W).