Skip to NavigationSkip to MainSkip to Footer
Symbus Mini

How USB-C replaces multiple ports and slims down your laptop

Have you ever wondered how modern laptops have become so thin and portable? One of the main design limitations which prevented manufacturers from slimming down their devices was the need to fit a range of legacy and proprietary ports into the laptop's frame, with ports for video output and network connectivity often being substantially taller than the laptop body itself.

A new, thinner way to connect

Key to reducing the thickness and number of ports required for external connectivity was the implementation of the USB-C standard. Although USB-A gained mainstream favor as an input and output interface in the early 2000s, it lacked the data and power transfer capabilities to become a true universal connectivity interface, limiting use to mostly external storage, printer, and other peripheral connectivity. The release of the USB-C standard in 2014 sought to solve these shortcomings while at the same time reducing the physical footprint of its almost 20-year-old predecessor. The result was an interface which made a number of existing ports and interfaces almost redundant, especially when used in laptops, tablets, and other portable devices.

Refresh: What is USB-C?

USB-C refers to the USB Type-C Cable and Connector Specification developed by the USB Implementers Forum (USB-IF; an industry development organization of which Moshi is a member). The specification defines the requirements for implementation of the slim and reversible USB-C port and connectors, ensuring compatibility across devices and manufacturers.

Key among USB-C's upgraded abilities is the increased data transfer rate (up to 10 Gbps), which allows for high-resolution video transfer over a USB-C cable. Where a laptop may have previously included a much larger VGA, HDMI, or DisplayPort connector, a much smaller USB-C port can carry video using one of these protocols and still be able to output it to an external hub or directly to a monitor. 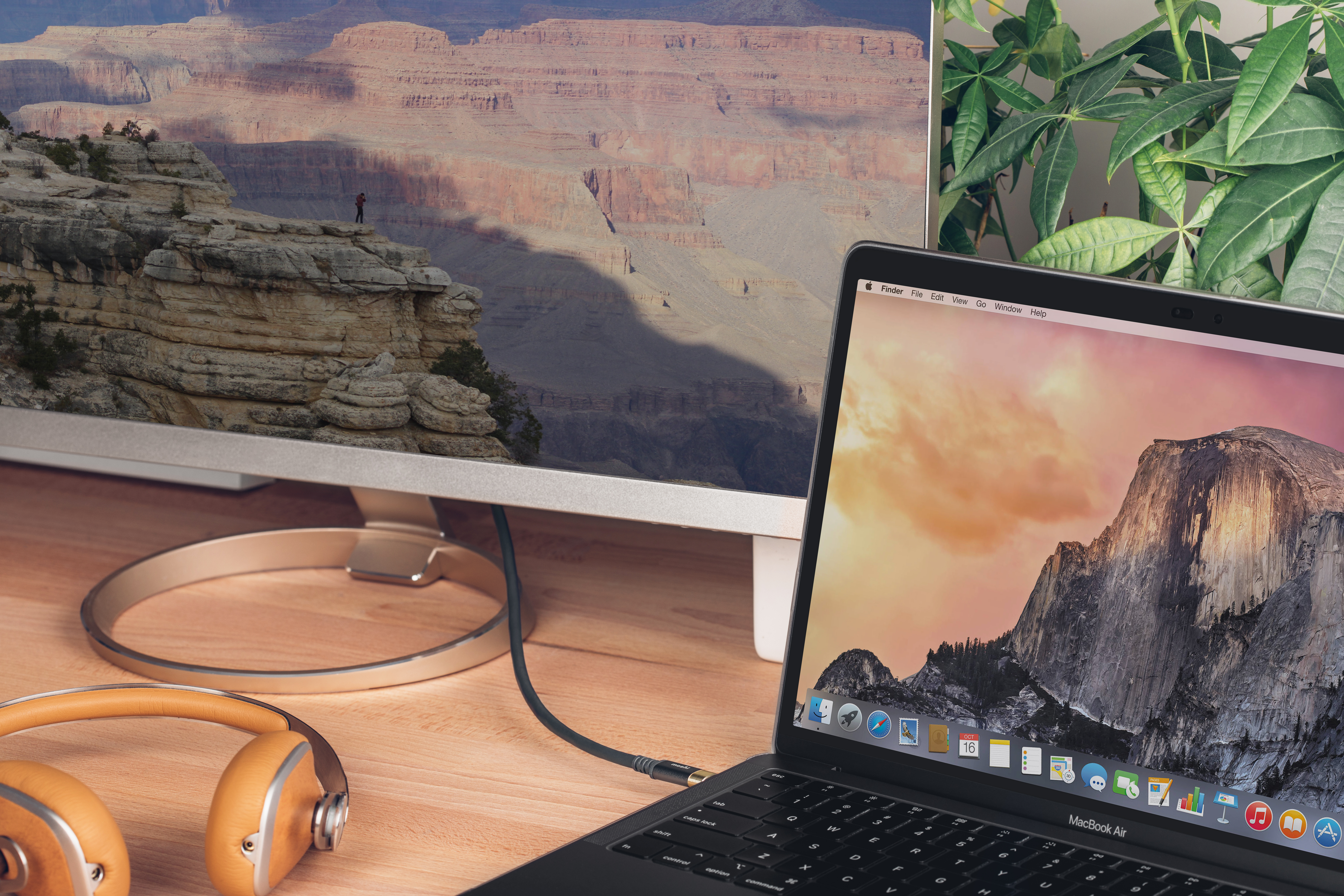 Arguably the most powerful benefit (pun intended) of USB-C is its ability to not only transmit more power to devices, but for power to flow in both directions. Baked in to the USB-C specification is the Power Delivery (PD) protocol, which dedicates a total of eight pins inside the connector and cable to power transfer and is capable of carrying a total of up to 100 W (5 A/20 V) over a single cable. This is enough to replace bulky proprietary power connectors on most laptops, with a single USB-C port able to handle both power and data connectivity simultaneously. And because a USB-C cable has the same connector at both ends, power delivery will work no matter which end is connected to your laptop or charger.

Pin layout of a USB-C connector. Four power and four ground return pins can deliver up to 100 W of power to devices

Of course most people would recognize USB as a way to connect peripherals and accessories to their computer, such as external storage, input devices, or printers. Removing the older and larger USB-A port from laptops has helped in the slimming-down process, and the good news is that USB-C is backwards compatible with all your existing USB devices, which can be easily connected with a hub or adapter. The high data transfer capacity of USB-C means that there will be no performance limitations for most USB-A devices. 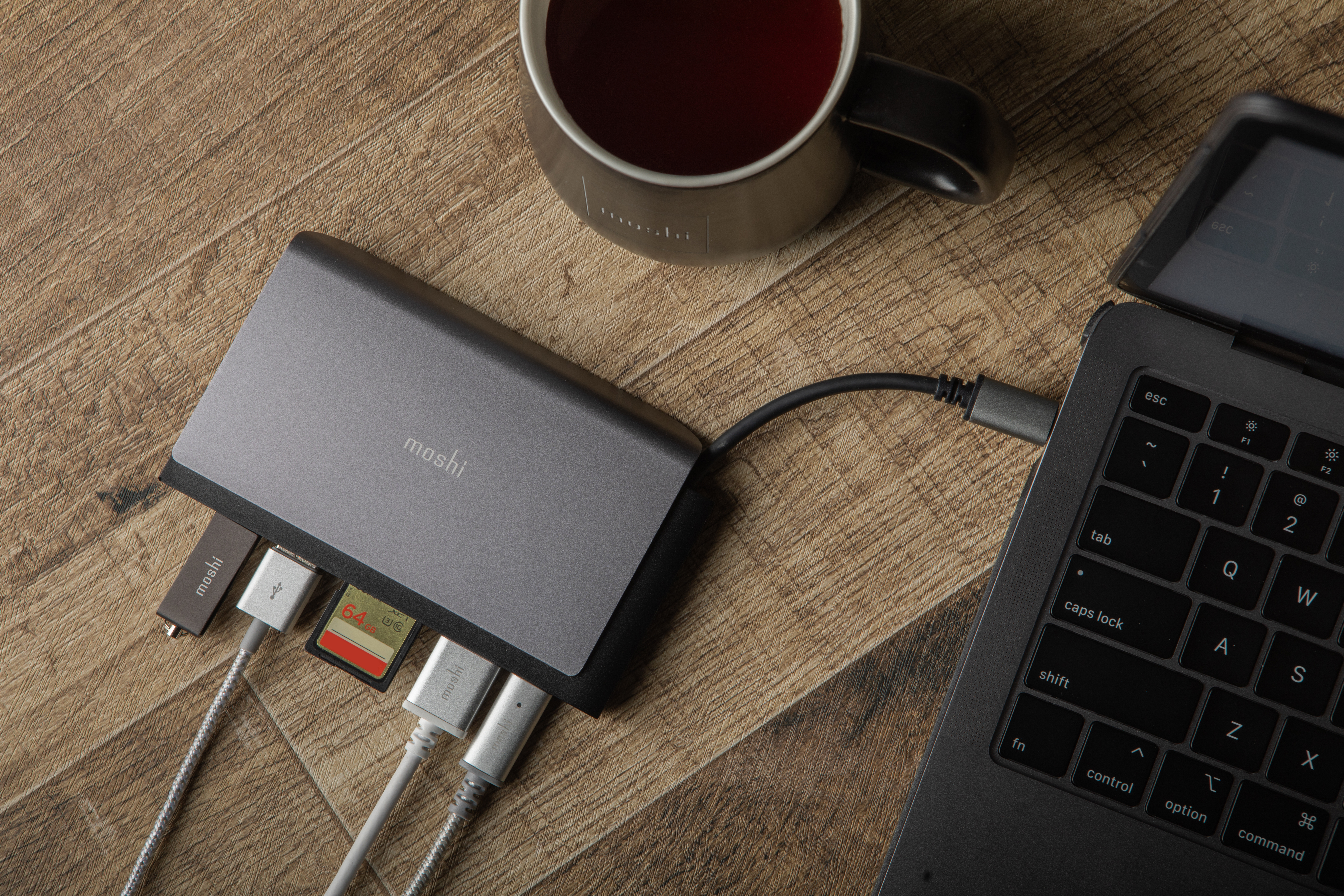 Although WiFi is most peoples' preferred network connectivity method, some workplaces, hotels, or conference centers still only offer wired internet connections. With Ethernet being one of the largest legacy ports, its removal goes a long way to reducing laptop thickness, with a USB-C port also able to handle Ethernet connectivity through a hub or adapter for those times when WiFi just won't cut it.

The move to a USB-C laptop has the potential to significantly reduce both size and weight, making for a much more portable device especially suited to those constantly on the move. Choosing a high-spec hub such as Moshi's Symbus Mini 7-in-1 Portable USB-C hub can help you to get the best performance out of a single USB-C port for maximum productivity and efficiency no matter where you may be.